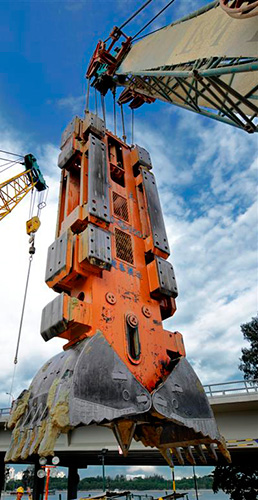 Review of Results for the Third Quarter Ended 31 December 2019

Quarter-on-quarter, the Group recorded a slight decrease of 6.7% in revenue compared to 2QFY20 as a result of lower sales generated from the Group’s equipment trading division.

The higher gross profit and GPM reflect the improvement in tender prices and business activity in these periods year-on-year.

The Group recorded higher other income of $1.9 million for 9MFY20 (9MFY19: $1.5 million) and $0.7 million for 3QFY20 (3QFY19: $0.2 million; 2QFY20: $0.6 million) respectively. These took into account the gain from the disposal of old equipment, along with the distribution of profit of $0.2 million from a property development project in Iskandar Malaysia.

The Group incurred higher other operating expenses of $21.5 million for 9MFY20 (9MFY19: $20.6 million). The increase was mainly due to higher legal fees accrued to recover outstanding debt and higher staff costs incurred due to an increase in headcount in the period under review.

The Group recorded higher impairment losses on receivables of $2.8 million for 9MFY20 (9MFY19: $0.3 million) and $2.2 million for 3QFY20 (3QFY19: $0.2 million; 2QFY20: $0.3 million). This took into account specific provisions made for the amounts due from various debtors following the assessment of recoverability of these debts in 3QFY20.

Net interest expenses for 3QFY20 was comparable to 2QFY20.

Profit/(Loss) for the period

Making its third consecutive quarter of profitability, the Group recorded profit before tax of $1.6 million for 3QFY20 compared to a loss before tax of $6.1 million in 3QFY19. Sequentially, profit before tax for 3QFY20 was lower compared to $2.2 million in 2QFY20, after taking into account the specific provisions made for the amounts due from various debtors of $2.2 million following the assessment of recoverability of these debts in 3QFY20.

Following the adoption of Singapore Financial Reporting Standards (International) (“SFRS(I)”) 16 Leases as disclosed in “Accounting Policies” on pages 23 to 24, the Group has recognised noncurrent right-of-use assets of $4.0 million.

Following the adoption of SFRS(I) 16 Leases, the Group has recognised current right-of-use assets and current lease liabilities of $6.7 million and $9.1 million respectively.

The lower cash outflows in 9MFY20 and 3QFY20 were mainly due to lower capital expenditure incurred during the periods under review.

The Group recorded net cash outflow from financing activities of $19.6 million for 9MFY20, compared to a net cash inflow of $4.4 million in 9MFY19, following the net repayment of bank borrowings during the period.

Net cash outflow for 3QFY20 was higher than 3QFY19 and 2QFY20 due to higher net repayment of bank borrowings during the quarter.

The Group is mindful of several factors that could cloud the current outlook. The recent outbreak of the novel coronavirus (“Covid-19”) poses a serious health threat and could lead to challenges, including manpower shortage arising from travel restrictions imposed on foreign labour. Construction delays and higher costs of building are expected to be aggravated by disruptions to the construction supply chain as some Chinese factories remain shut until further notice due to the Covid-19 outbreak.

In addition, the wider economic and geopolitical issues surrounding US-China relations, and the UK’s exit from the European Union, remain a source of risk to Singapore and other ASEAN economies.

Against this backdrop, the Group will continue to leverage its strong capabilities and solid track record to tender actively for projects. It will also remain focused on anticipating and adapting to industry changes, while ensuring optimal utilisation of its equipment and resources.